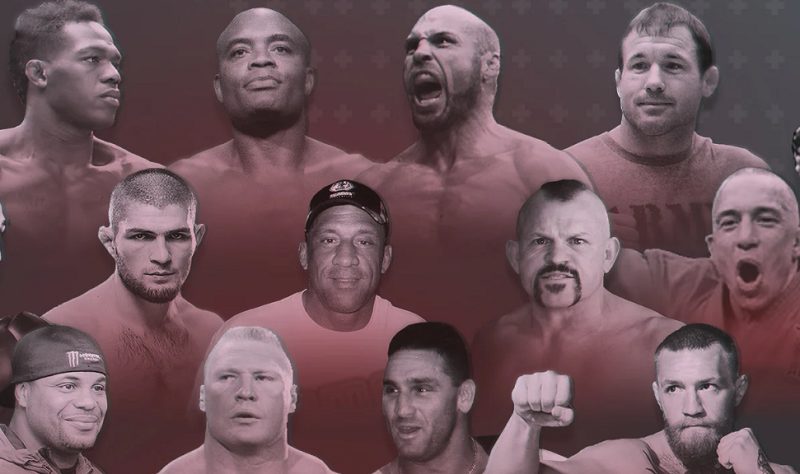 The UFC was founded in 1993, but it wasn’t until 2001, when Dana White became president, that the fighting league became popular. Boxing used to be the main combat sport, but these days the UFC reigns supreme.

Conor McGregor is by far the most famous UFC fighter in history; no one approaches him. Notorious has more than 40 million followers on social media, although he’s been fairly inactive in recent years aside from back-to-back losses to Khabib Nurmagomedov and Dustin Poirier and a first-round KO by Donald Cerrone.

According to Forbes, he was the highest-paid athlete of 2020 and his PPV events continue to break records. He took the UFC back to the glory days it’s in now and started the trend of trash talk among attention-seeking fighters. But nobody but Conor can be Conor.

The guy single-handedly took MMA to the level of boxing, which is crazy considering boxing was untouchable as the world’s most popular combat sport for decades.

If you started watching MMA and UFC in the mid-2010s, I would say that Khabib Nurmagomedov is hands down the best MMA fighter in history. Well, I’ve been a fan of MMA since the mid-2000s and I have to tell you I totally agree.

The eagle has never lost a fight in its life. Better still, in his 29 pro fights, one could argue that Khabib lost just a single round in all of those fights (before destroying Conor McGregor in the next few rounds before finishing him off).

Outside the cage, he’s never been a trash talker or troublemaker, which is why fans love him so much. He came in, did his thing, and always showed respect by emphasizing his greatest values: family, respect for his opponents, country, and culture.

His amazing 28.5 million followers on his Instagram show how popular he is. He is what every fighter should be: humble and respectful outside the cage, but ruthless inside.

Ronda Rousey is the only woman on this list, but there’s an important reason she’s at the top. Rejuvenating the UFC at its toughest, Rowdy was the promotion’s biggest star for years. She crushed her competition and amassed huge PPV numbers, easily making her one of the most famous UFC fighters of all time.

Even after the two devastating knockout losses that sent her into retirement from MMA, Ronda remained one of the most popular MMA icons worldwide, amassing more than 13 million followers on Instagram, competing and performing in WWE. in various Hollywood productions.

There is so much controversy surrounding Jon Jones but one thing is for sure, he is one of the greatest MMA fighters of all time and he is also one of the most popular fighters. There isn’t even a single casual MMA fan who hasn’t heard of Bones, his prolific fighting skills, but also his cocaine abuse, doping violations, hit and run that led to his arrest, etc.

He’s a huge MMA icon and has only suffered one loss in his entire career. And he wasn’t defeated, he was disqualified.

BJ Penn has always been a fan favorite. He never shied away from a challenge and gave us some of the best, bloodiest, and most exciting fights in MMA history. He is also the first fighter to win championships in multiple divisions of the UFC. Several fighters have made it after him, but he was the one who showed it’s possible.

I feel so bad he didn’t know when to stop as Penn lost his last seven fights to end his career with a 16-14 record. However, he is a much better fighter than the records show and has fought incredible fighters throughout his career including Matt Serra, Matt Hughes, Georges St-Pierre, Nick Diaz, Diego Sanchez, Frankie Edgar, etc.

Brock Lesnar is probably the worst UFC champion of all time. However, he is definitely one of the most popular fighters to ever compete in the octagon. The promotion pumped him up like crazy, and he somehow justified it by beating an old Randy Couture and surviving a carnage to strangle Shane Carwin.

Doping violations left a big stain on everything, and he never returned to the Octagon after being caught cheating. Before (and after) his MMA days, he had wrestling experience, but it was his stints in WWE that made him famous around the world. He is the only fighter in history to hold both the UFC and WWE titles.

When Daniel Cormier was the champion he almost got another chance to fight for the UFC title, he even had some ringside shenanigans with him. However, the fan backlash was too great and Lesnar didn’t want to deal with the USADA (Anti-Doping Agency) again.

Fans dubbed it the greatest money fight of all time, and they were right not to complain. Imagine Brock fighting for the title after back-to-back KO losses and a no-contest due to a doping violation and two years of inactivity. Yes, Lesnar was that popular.

One of the first real stars in the UFC was the incredible Randy Couture. He competed in the UFC almost from the start; His first appearance in the Octagon was at UFC 13 in 1997. What made Randy so famous was that he kept coming back after people thought he was washed.

He lost to Josh Barnett and Ricco Rodriguez in 2002 but came back and destroyed two rising stars, Chuck Liddell and Tito Ortiz. He then lost to Vitor Belfort via cut, only to crush him in the next fight. Chuck Liddell then knocked him out twice in 2005 and 2006. beaten. That was the end of his career, wasn’t it? Not correct.

Couture returned and rose to the heavyweight division where he won the title against Tim Sylvia. He then defended this against the overrated Gabriel Gonzaga in one of the bloodiest matches in history. Again everyone thought he was done when Brock Lesnar knocked him out for the title. hit and Antonio Nogueira defeated him in the next match.

Daniel Cormier is considered by many to be one of the top five MMA fighters of all time. What makes his career in MMA even more special is that he started training and competing very late. He joined the UFC at 34, the exact age many fighters retire. Despite this, he was incredibly successful, only losing to two fighters in his career.

And these two are also among the top five MMA fighters in history: Jon Jones and Stipe Miocic. DC is one of the few fighters to be a two-time UFC champion while also holding light heavyweight and heavyweight titles. He retired with an impressive career record of 22-3 and became a pundit commentator and analyst for the UFC.

He also has almost 3 million followers on Instagram, not only because of his career in MMA but also because of his appearances on television and his entrepreneurial spirit in wrestling.

Max Holloway is only 29 years old is unfathomable given his spectacular resume in the UFC. Bendito is one of the best MMA fighters in history and his career is far from over. He was the UFC featherweight champion after dethroning Jose Aldo, who ruled the division for years before Max made his mark.

What makes him a fan favorite is his relentless fighting style. When it comes to average shots per fight, he tops the list in UFC history. Even when he takes damage, he keeps coming back, overpowering his opponent with volume and precision.

Aside from his spectacular MMA skills, he’s one of the friendliest people he’s ever met, humble in both defeats and victories. Not only the fans but also his wrestling partners love him for his sporty attitude. Holloway’s social media profiles are a testament to his enormous popularity as Blessed has over 2.5 million followers worldwide.

Chuck Liddell or Tito Ortiz on this list as they were both incredibly famous at one time, but I chose The Iceman as he usually brings out the best in their rivalry. Liddell and Ortiz were the first high-profile matchup in UFC history, and their rivalry extends well beyond the Octagon.

Chuck has long been the biggest star in the UFC and remains a popular character among MMA fans. Unfortunately, he’s one of those legends who should have quit sooner, losing six of the last seven fights of his career. Despite being in his 50s, he still has nearly a million followers on Instagram and remains a very popular member of the MMA community.

Georges St. Pierre isn’t on the list, they have no idea what they talk about. The Canadian superstar has only two career losses and she’s avenged both. He is one of the oldest UFC champions and ended his career on a winning streak. 13 wins in a row.

He ruled the welterweight division for years, retiring and returning after four years to demolish Michael Bisping and also take the middleweight title. GSP fought many wars in the Octagon and generally prevailed even when defeated and injured. He is the definition of a warrior and is loved by fans to this day.

Even though he started following MMA after his prime, you know who Anderson Silva is and what he’s done for the UFC and MMA. One of the best fighters for it, Spider is a true icon of great athleticism with even greater skills.

He demolished people with his incredibly flashy fighting style that made him a fan favorite in the UFC from day one due to his never-before-seen amazing skills. It wasn’t long before he became the world middleweight champion and he held that belt for more than five years.

UFC is a world-renowned MMA organization that has produced some of the best fighters in the world. Whether you’re a novice looking to get started, or an experienced fighter looking to improve your skills, the UFC has something for you. So if you’re ready to take your training and fighting to the next level, be sure to check out the UFC!